3. BREAK DOWN THE WALL

After a quarter of a century KILLER still rings hells bells in the minds of innumerable metal fans around the world. One of Belgium?s all-time most successful rock music export products, KILLER were enthused by SAXON, IRON MAIDEN and other pioneers of the NWOBHM, but being an extremely loud trio, and with their trademark growling vocal delivery, they were always compared with MOTORHEAD, until latter days when they added a second guitar player, and reinvented themselves as a quartet. The reissued compact disc version of FATAL ATTRACTION contains four bonus tracks from founding member, guitarist SHORTY VAN CAMP?s solo album VAN CAMP, 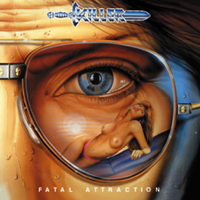